François-Henri BRIARD is a man of two worlds: as a fine connoisseur of the French society and a fervent disciple of the French-American alliance. With Hon. Justice Antonin SCALIA, he was the founder of the VERGENNES Society (1993), dedicated to the relationship between France and the US regarding legal matters. He  works with American think tanks as the FEDERALIST SOCIETY and the AMERICAN ENTERPRISE INSTITUTE. He was a Trustee (2004-2012) of SARAH LAWRENCE COLLEGE in NEW YORK (NY). He is a member of the SUPREME COURT HISTORICAL SOCIETY. 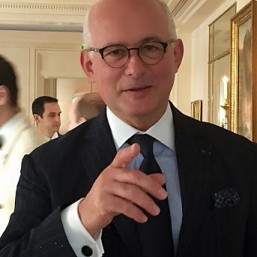 Son of a French Officer who fought in Indochina and Algeria, François-Henri BRIARD graduated in 1980 from PARIS Law School (Paris XI and Paris II) and from SCIENCES-PO PARIS (Public Service). Professor at the NATIONAL SCHOOL OF ADMINISTRATION OF MALAYSIA and at PARIS XI LAW SCHOOL (1980-1984), he graduated from the French INSTITUTE FOR DEFENSE HIGH STUDIES (Class of 2006, promotion CASTEX) and was a member of the French WAR COLLEGE Jury (2011).

Born in 1957, father of six, he is a Reserve Officer, Commander in the French Navy (national award in 2011), a Knight of the Legion of Honor, an Officer of the National Merit, a Knight of the Academic Palms, a member of the SONS OF THE AMERICAN REVOLUTION and of the CINCINNATI FRANCE.